As the world continues to expand in entrepreneurial opportunities, women continue to make up a smaller number of entrepreneurs. Challenges remain in both developed and underdeveloped countries that continue to cause the existing gender gap.

According to Mally (2016), there are only six economies (Vietnam, Philippines, Thailand, Malaysia, Peru and Indonesia) where women show equal or higher entrepreneurship rates than men. 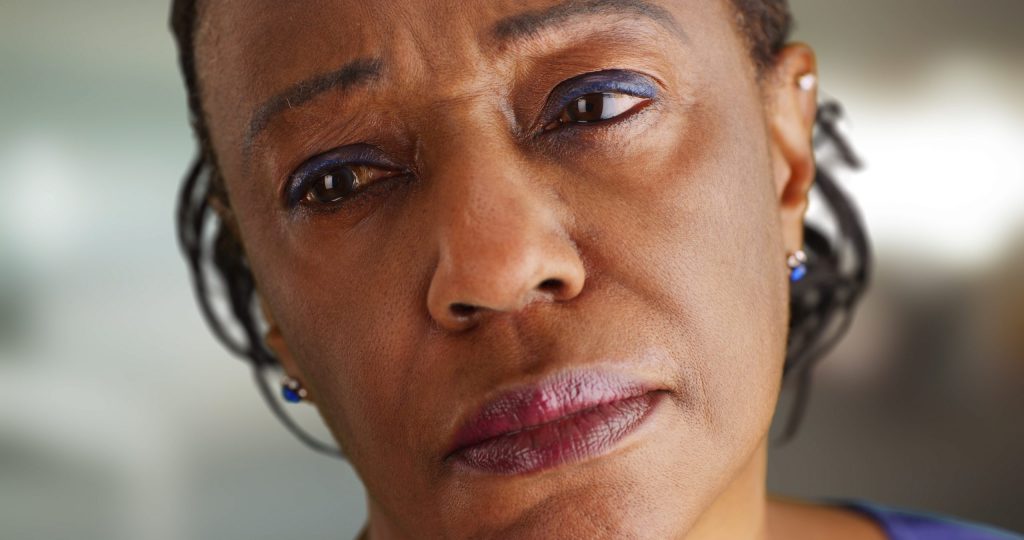 What then are the barriers facing women as far as entrepreneurial opportunities go? A major barrier is having access to financing. Other barriers include dealing with gender bias, lack of mentorship opportunities, lack of relevant networks, insufficient links to high-value markets among others.

This is even worse for women in sub-Saharan Africa. Looking at the barrier of having access to financing, studies show that traditional lenders such as banks and credit unions are usually hesitant and sometimes downright resistant in offering women entrepreneurs seed money in comparison to men.

Studies also show that when women seek loans from alternative lending sources, the interest rate is usually higher. This means that usually when a woman starts a business, she does so with a heavier debt rate. This increases the potential of her business failing.

Therefore, women continue to lag behind men in business ownership and economic independence on every continent. This is even worse in sub-Saharan Africa. Other factors that hinder women’s access to financing include women’s legal position and rights to properties.

It is also important to note that economic empowerment is vital to ensuring gender equality. Women and girls bear the brunt of most social and economic disadvantages.

They are more likely to be unemployed, they are over-represented in informal and vulnerable employment, paid less than men, bear disproportionate responsibility for domestic work, less likely to have access to social protection.

They face more disadvantages in starting businesses, face more violence and harassment, have significantly less access to, control over, and ownership of land as well as other productive assets in comparison to men. 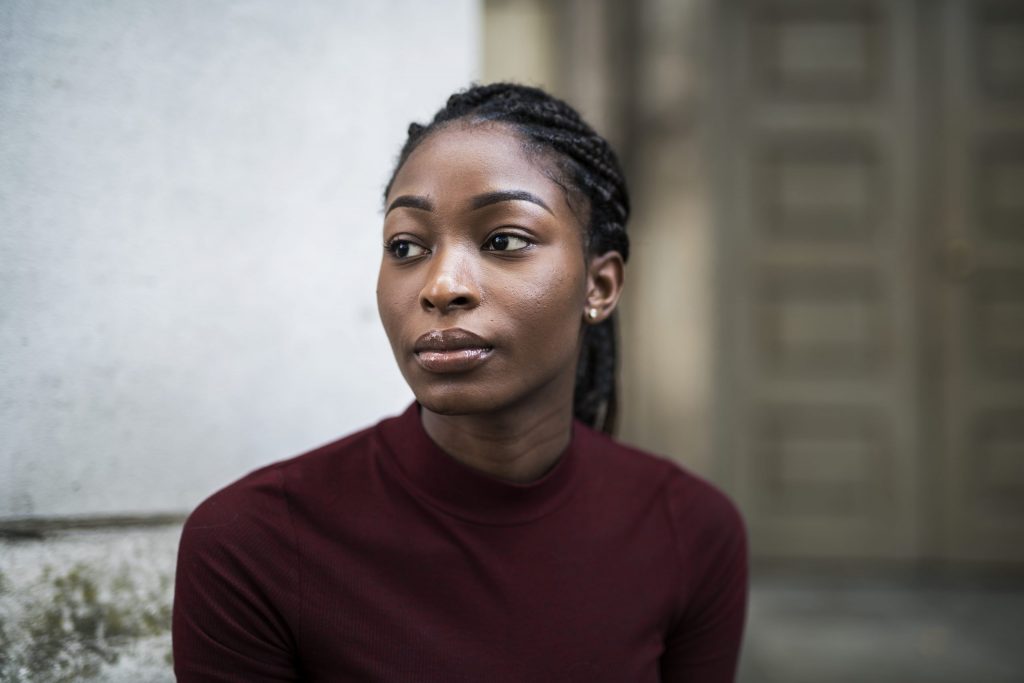 Therefore, empowering women economically bridges the gap of inequality between men and women. It leads to the reduction of the economic, social, and legal disadvantages that women and girls often bear the brunt of. Empower a woman, and you just might break the cycle of poverty. Empower women, empower communities!

Data show that when women have access to economic opportunities just as men do, there is a reverberating positive effect in families and communities. In these communities, there are fewer child deaths, fewer conflicts, better public services, and public health, the GDP of the countries grow, and economies thrive globally.

Woetzel et al, (2015), in a McKinsey Global Institute report, project that $12 trillion could be added to global GDP by 2025 if women’s equality is advanced. This is an increase of 26 %. It becomes clear that women entrepreneurs are an important untapped source of economic growth.

When women are entrepreneurs, they create jobs for themselves and others. Mally (2016) notes that they provide different solutions to management, organization, and business problems as well as to the utilization of entrepreneurial opportunities.

A 2009 report cited by Mally (2016), notes that gender equality in entrepreneurial opportunities fuels growth and raises the overall level of human capital, productivity, and wages. 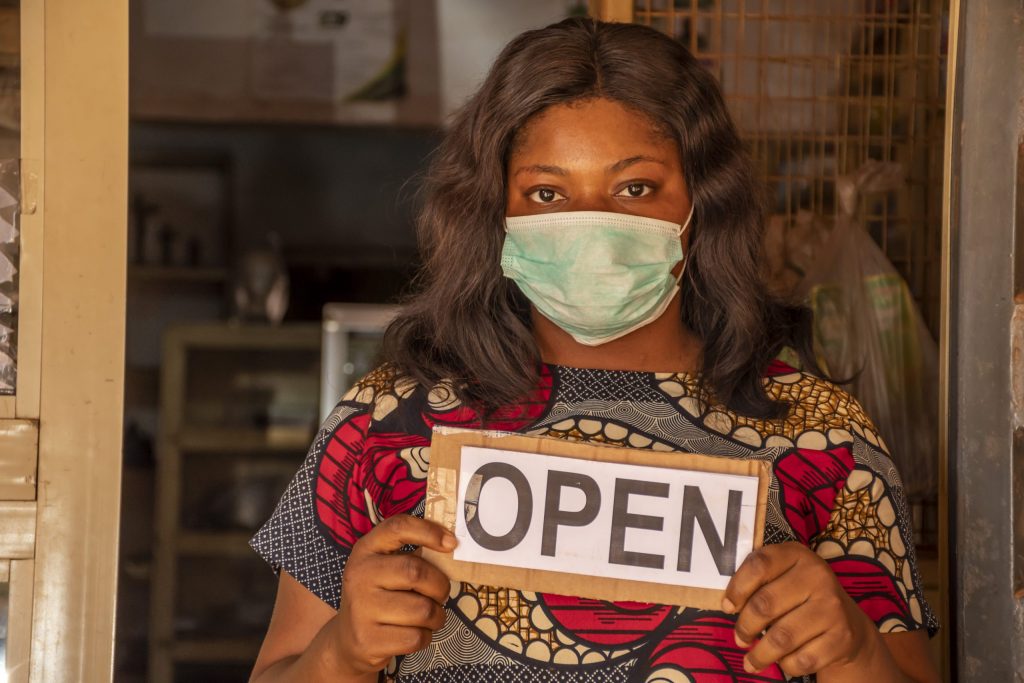 Studies show that women are responsible for about half of remittances. Thus, women entrepreneurs by taking care of their families through their businesses ensure that there are more stable families and by implication, more stable communities. Women entrepreneurs, therefore, spread the wealth and create a positive impact on future development.

A report by the International Finance Corporation (IFC) cited by Maxwell makes strong arguments for investing in women entrepreneurs. According to their findings, women entrepreneurs open new markets, offer unique assets and abilities as well as strengthen and diversify supply chains. 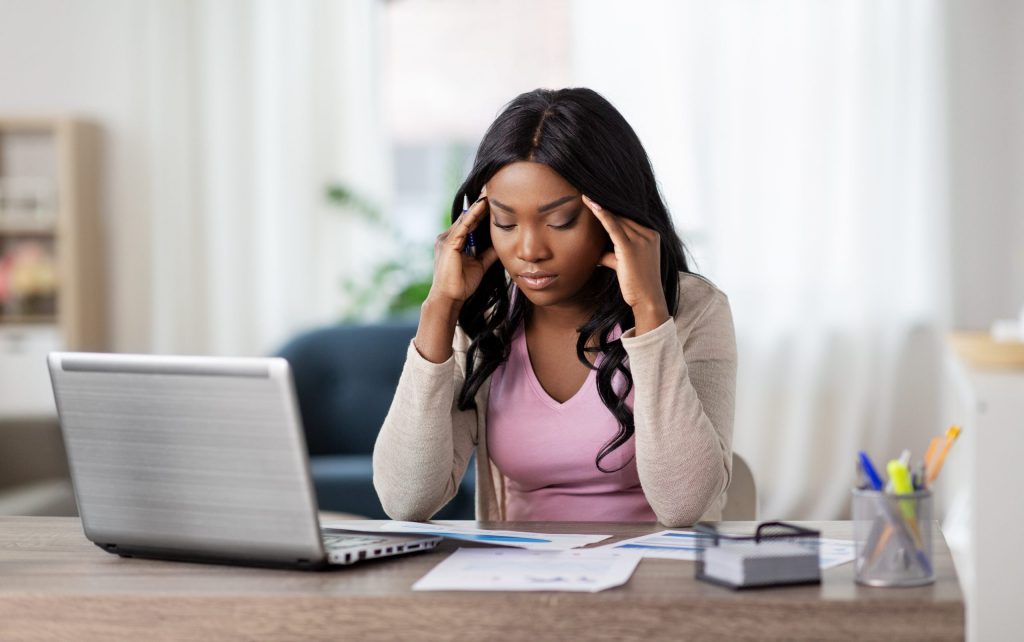 As earlier reported, one of such barriers and a major one at that is the lack of access to financing. For women to start businesses, they need capital. Maxwell states that the 2016 Africa Human Development Report notes that gender inequality costs sub-Saharan Africa an average of $95 billion annually.

This is a huge loss to economies that are already underdeveloped. Thus, women’s inability to have access to entrepreneurial opportunities hinders the continent’s economic growth, and advancement and leads to poorer life outcomes.

This is particularly difficult for women to access in sub-Saharan Africa due to cultural attitudes and gender bias. The irony is that the majority of women in sub-Saharan Africa contribute to the financial upkeep of their homes as one source of income cannot take care of the average family. 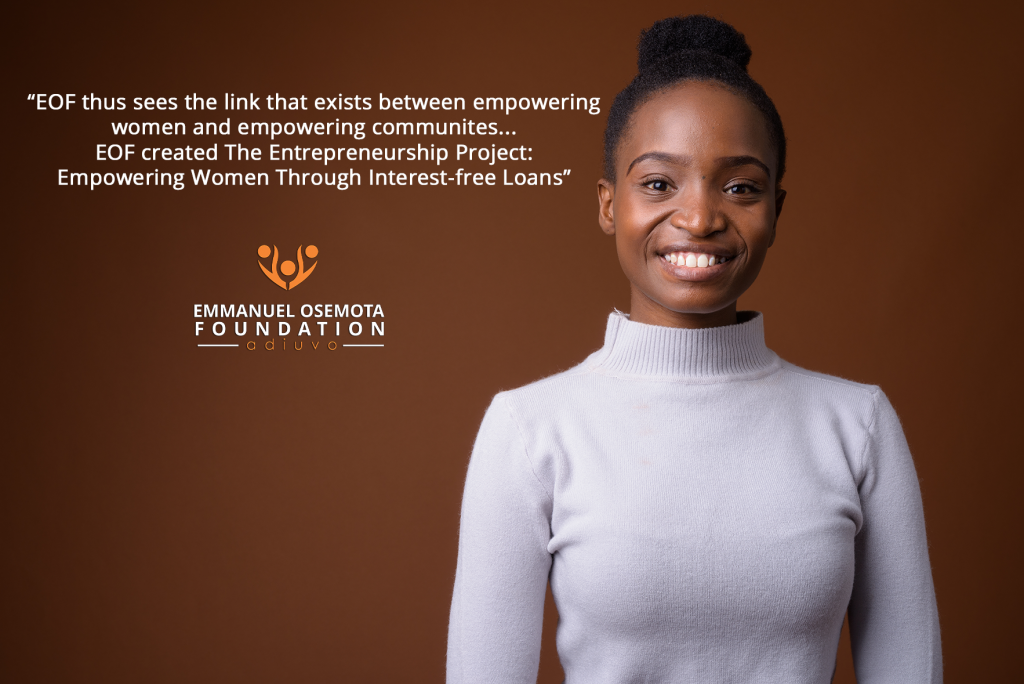 They seek out women who toil every day in the hopes of ensuring that their families are healthier, financially independent, and securing a future for themselves and their children. EOF created The Entrepreneurship Project: Empowering Women Through Interest-free Loans. A financial initiative project under the Becca Renaissance branch of the Emmanuel Osemota Foundation.

This project provides microcredit and micro-interest-free loans to women in the poorest communities in Nigeria, with special emphasis on women and girls in Edo State. 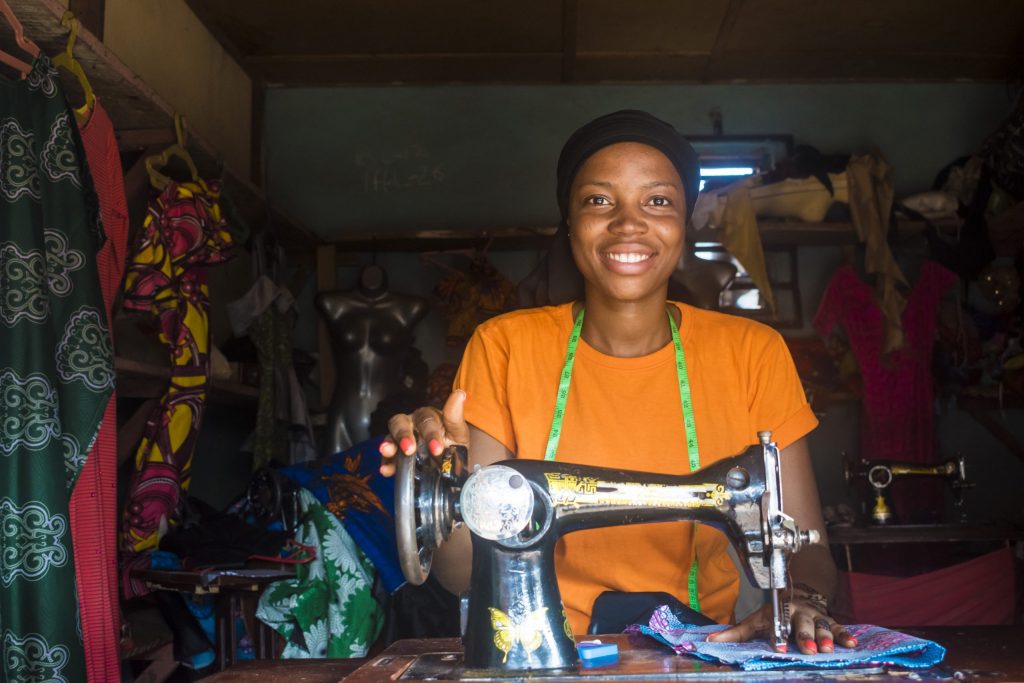 This microfinance initiative; thus, provides loans to women in the communities without the provision of collateral in seeking these loans. These women get the loans and are not expected or required to pay interest on these loans.

This is a huge source of relief to the women who ordinarily would be denied these loans if they applied for them at traditional lending institutions. These collateral-free and interest-free loans enable women to start businesses, acquire business skills and build assets.

By empowering families, communities are empowered. In doing so, perhaps generational cycles of poverty can be broken, and the next generation can hopefully begin to build generational wealth.

EOF… in empowering women living in rural communities in Nigeria, and Edo state, in particular, they can promote in-country development from the bottom up

The Emmanuel Osemota Foundation provides interest-free loans between ₦10,000 and ₦65,000 to women in need of loans to start small businesses ranging from trading to skilled work. These loans are provided to marginalized women with the provision that they pay back the loan in six months.

There are incentives for those who dutifully repay their loans. Initial loans are ₦10,000, but beneficiaries who repay their first loan within three months automatically become eligible for a second loan of ₦15,000. In essence, the amount they can borrow grows as they repay until it reaches the loan cap of ₦65,000. 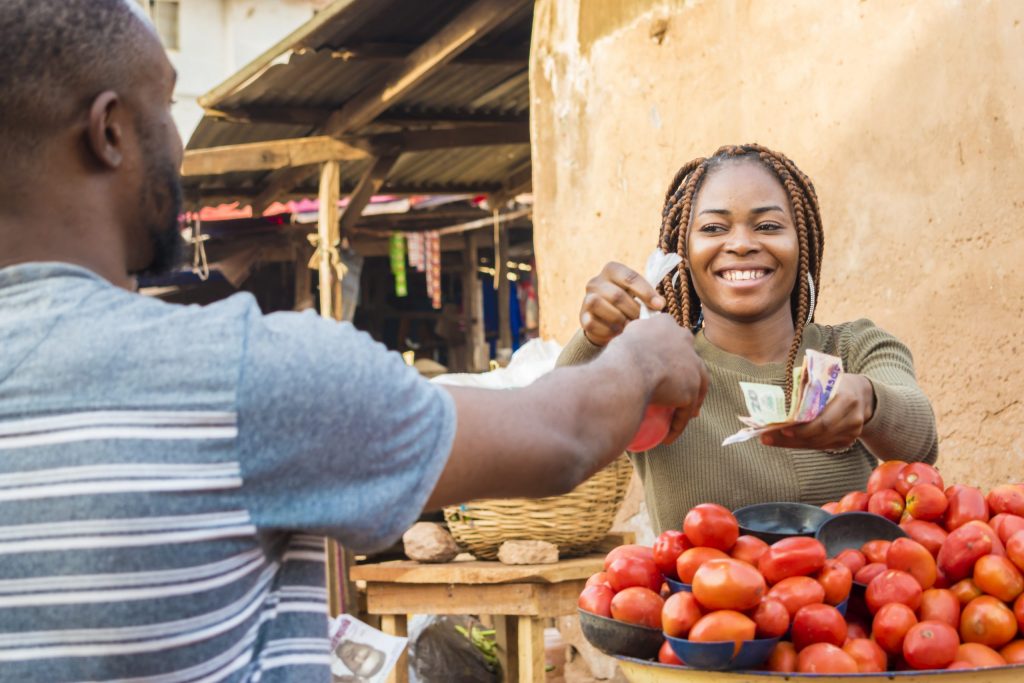 EOF hopes that in empowering women living in rural communities in Nigeria, and Edo state, in particular, they can promote in-country development from the bottom up.

Hopefully, these women become involved in grassroots movements and advocate for far-reaching social and economic changes in their communities. And by enabling these women to have economic opportunities, their dignity is preserved.

The EOF being a non-governmental organization and a not-for-profit organization relies on the donations made by foundation members and supporters. But that can only go a little way. This is why the Emmanuel Osemota Foundation appeals to the good conscience of members of the public for donations.

We Thank You for Your Donation! 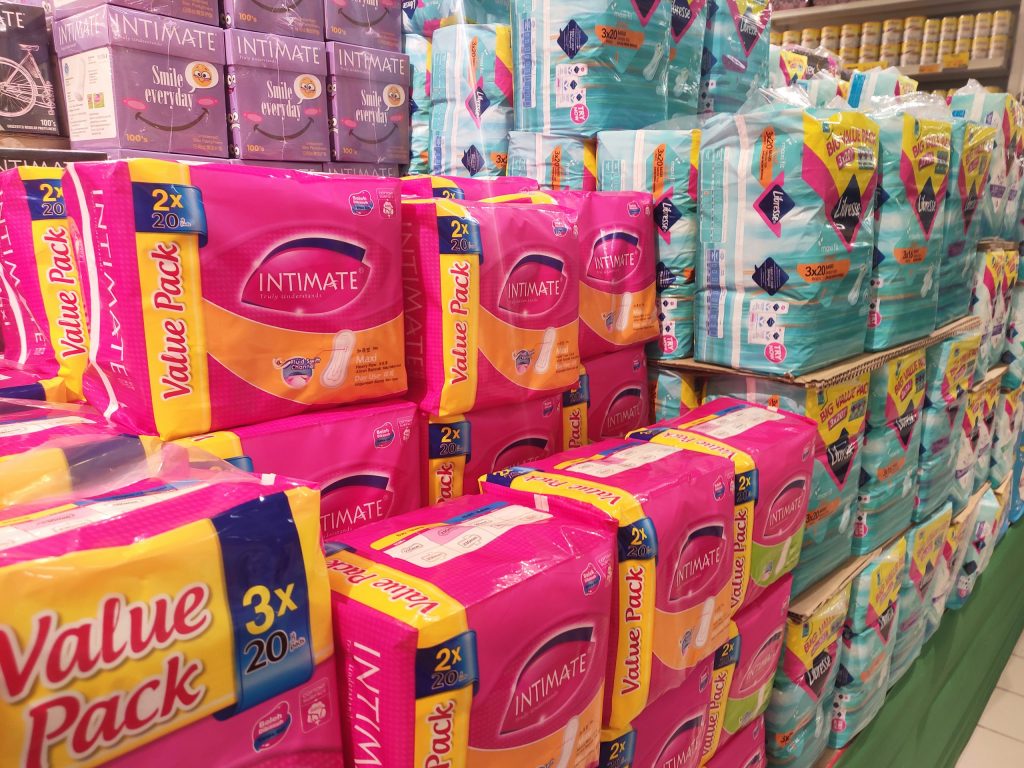 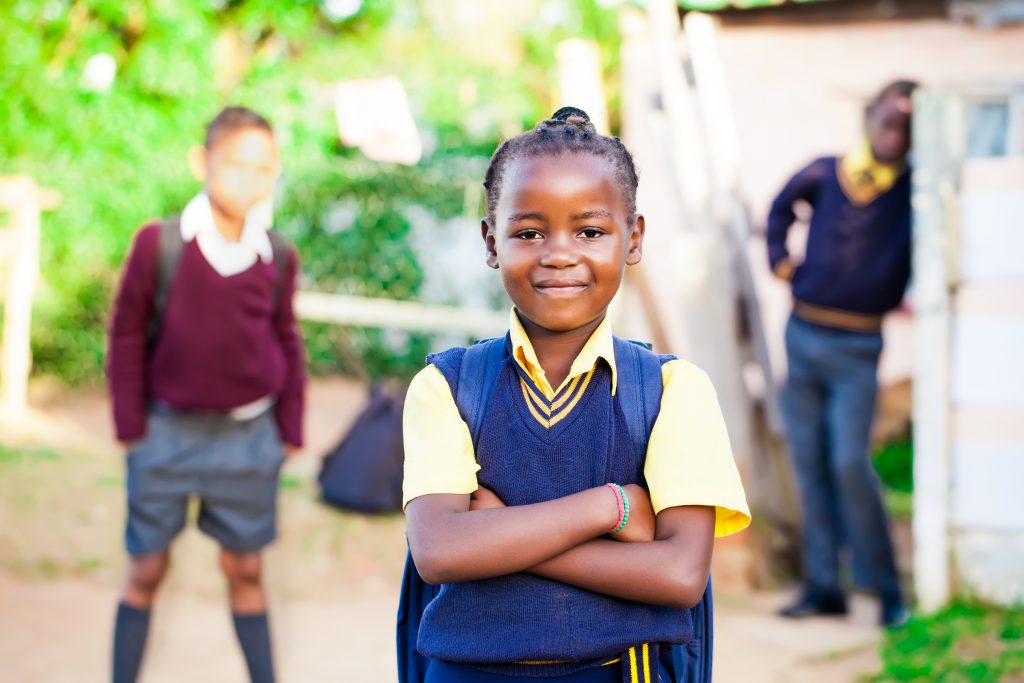